The King of Schnorrers 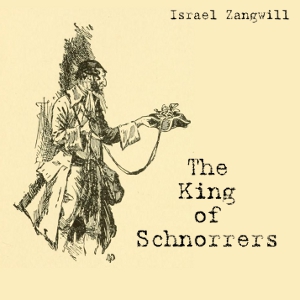 The King of Schnorrers

LibriVox recording of The King of Schnorrers by Israel Zangwill.
Read by Adrian Praetzellis.

Manasseh da Costa is a schnorrer (beggar) who lives on the charitable contributions of the Jews of late 18th-century London. But Manasseh is far from being a humble panhandler for, as every schnorrer knows, supporting the poor is a commandment from God (a mitzvah) not just a favour. And as the descendant of Portuguese Jews who had lived in England for many generations, Manasseh is the social superior of those newly arrived from Eastern Europe (called 'Tedesco'), even his wealthy patron Joseph Grobstock. As this hilarious satire concludes the ever-audacious Manasseh strikes a blow for tolerance—while helping himself along the way. Israel Zangwill (1864-1926) was born in England of Russian parents. He was the author of "Children of the Ghetto," a novel set in London's heavily Jewish East End. (Summary by Adrian Praetzellis)

Reviewer: seventyeight - favoritefavoritefavoritefavoritefavorite - June 24, 2017
Subject: I absolutely LOVE this story!
Zangwill and Praetzellis belong together. Israel Zangwill tells the story of Jewish life in London with humor and compassion that must have been unique for his time. I laughed out loud over and over at the accuracy of the characters and Adrian Praetzellis spoke with the accents I remember from spending many years in a neighborhood populated by similarly witty and astute people. This has been a great pleasure and I've listened to this recording several times.

6/23/17 Additional note: Yes, this story is filled with stereotypes which, in a non-humorous story would be deeply offensive. I would argue that Manassa is not one of these. He's an intelligent human being who uses his wits to demonstrate his logic to the community and this works to his benefit. He's not what is objectionably called "a clever Jew." When he outsmarts another character it's because the person is so comfortably wrapped in their so-called privileges they don't know it has become a straight jacket. By insisting on living and dying by their elaborate rules, Manassa challenges them to think for themselves and suggests reasonable alternate interpretation. And isn't that one of the purposes of the study of the Torah? Is it duplicitous if someone studies the texts essential to the understanding of Judaism and that study leads him to a viewpoint that might challenge accepted beliefs, does that make it wrong? I don't think Manassa's chief goal is to "pull the wool," over someone's eyes. He's usually more than technically correct in his assessments of "the rules." That's what makes this story great--he's "afflicting the comforted," those who like to use their supposedly unchangeable rules to keep the power in their own hands. If it was mere trickery it wouldn't make the leaders of the synagogue so angry. Manassa is not only TECHNICALLY correct, his arguments have a sound basis in Torah and that's why ultimately most of those he has supposedly "tricked," have a grudging respect for him. Has he achieved his goals unfairly? I don't see it that way. To put it more crudely, Manassah is a great deal more than just a "smart ass." Maybe I'm over-interpreting the text but it seems to me there's more going on here than what's on the page and maybe Zangwill was suggesting that other bureaucracies (read: non- Jewish ones) might "benefit" from the study of Manassa's way of thinking.

Reviewer: Philippe Horak - favoritefavoritefavoritefavorite - April 11, 2008
Subject: A very nice reading - questionable "Zangwill" humour
Written with great satirical perception and an unerring sense of wry, preposterous humor, the book relates the adventures of Manasseh Bueno Barzillai Azevedo da Costa, a proud, resourceful Sephardic schnorrer (or beggar) who lords it over his fellow mendicants in London of the late 1790s. Faced with the marriage of his daughter to a man he considers a socially inferior beggar, Manasseh uses all the powers of his intellect to deal successfully--and with comic repercussions--with what he perceives as serious problems of life. Widely regarded as one of the author's most enduring works, this witty and wise literary gem pokes fun at the prejudices dividing London's Jewish community in the late eighteenth century.
The story is full of clichés about the stinginess of the Jews etc... Not everybody's cup of tea...
The recording is excellent, however. Five stars for Mr Adrian Praetzellis but only three stars for the book.